For a short time, Houston will have the opportunity to view dozens of exhibits by national and international artists in venues from major museums to vacant lots. Surprisingly, these works can be purchased relatively inexpensively.

Why do you have this unprecedented opportunity? Because, Houston’s George R. Brown Center is the location for the annual conference of the National Council for Education in the Ceramic Arts (NCECA, pronounced N-ceca). There will be 5,000 “clay people” in the bars and restaurants downtown (especially the bars, clay people like their beer; believe me, I’ve attended many of these conferences).

And why will these works be “relatively inexpensive”? Because for better or worse there is a terrible schism in the art world that, ignoring millennia of objects created by cultures around the world, regards the ceramic medium as “craft” and somehow less important than “ART.” 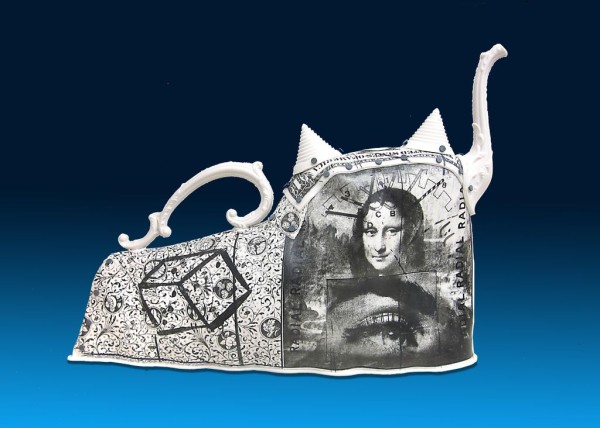 Les Lawrence, New Vision Skull Teapot No: 33 (2011) in Clay and Print IV, on view at the Museum of Printing History

Until their deaths, major works by major American artists like Peter Voulkos, Robert Arneson, or Rudy Autio were within the means of even a meager budget. This conference brings beginning collectors in Houston their finest opportunity in over a decade to acquire.

So charge up the car and wear your best walking shoes, because there are wonderful things to be seen, from Spring to Galveston and Beaumont. A good place to start would be a quick trip to the Houston Center for Contemporary Craft, which is exhibitiong the 2013 NCECA Biennial and spiral outwards. -Meredith Jack 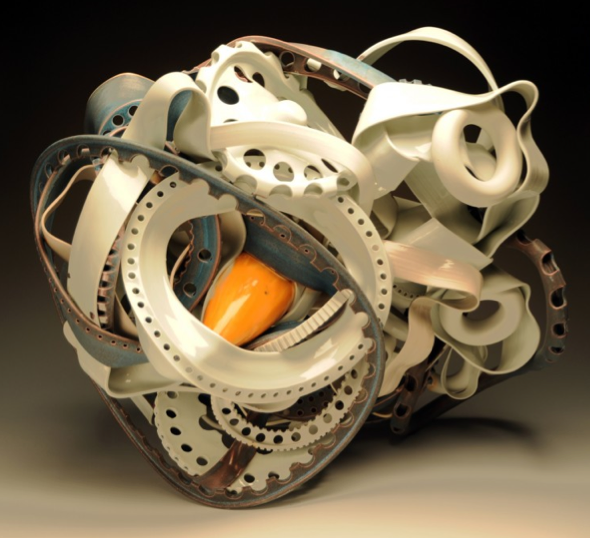 Ryan D. Labar, Time and Inner Space (2010) in the NCECA Biennial on view at the Houston Center for Contemporary Craft

Ceramics is a techie medium—no wonder NCECA is an early adopter of nifty electronic tools to manage the tsunami of info available to conference-goers—the 47th Annual Conference App. 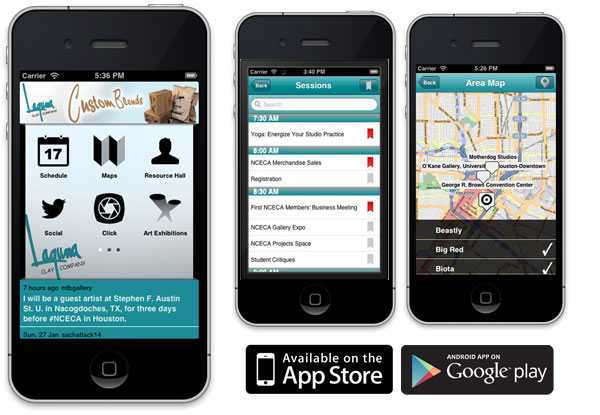 It’s going to save me a lot of work—with a minute-by-minute conference schedule, maps and listings of all the 100+ associated exhibitions around town, links to NCECA on Facebook and Twitter and its own internal conference specific messaging, that leaves Glasstire contributors free to bring you one of our signature rambles through an event that literally defies an overview. -Bill Davenport

I live just down the road from the Ceramic Store, mecca for all things clay, and paid a visit. When I pulled up, a tour bus was disgorging a stream of ceramic educators into the parking lot. A crowd of shoppers filled the normally sleepy store, fondling tools, comparing kilns and taking in several exhibitions set up in improvised spaces throughout, and even outside, the building. 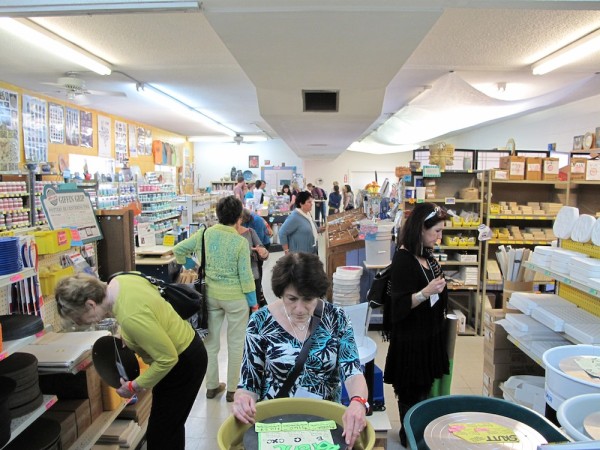 Crowd at the Ceramic Store 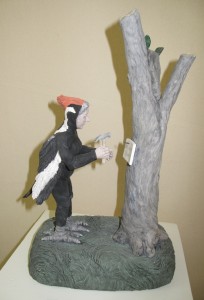 Upstairs, in a very respectable classroom-temporarily-rigged-as-gallery, was Attachments 2013, a group show organized by Jennifer Quarrels of the Texas Clay Arts Association. The show is a typical conference-time mishmash of styles and approaches: The important thing is being seen; coherence can wait. Functional pots and figurative sculpture rubbed elbows with Colby Parsons’ video projections on ceramics. The TCAA is a renowned group—I recognized pieces from several artists from previous shows. Pat Johnson of Fayetteville contributed two of her dry ceramic fairytales.

Chris Gray’s Raven Bottle illustrated, for me, the conflicting impulses that entangle and upend much contemporary ceramic work. I first saw the piece from behind: a satisfying lidded bottle, flawlessly glazed a heavy, milky white. Nice. But then, the front: a dark, roughened silhouette of a raven’s wing, like a shadow across a snowfield. Trite, portentious and not particularly well-drawn, in comparison to the bottle’s immaculate finish. The thought process is so clear, the result so regrettable, it’s like watching a car wreck from the sidewalk: highly skilled artist makes intriguing bottle, but, intimidated by ignorant art hierarches into discounting her own mastery, wants “something more.” Artist ruins nice bottle with bad art. Sigh. 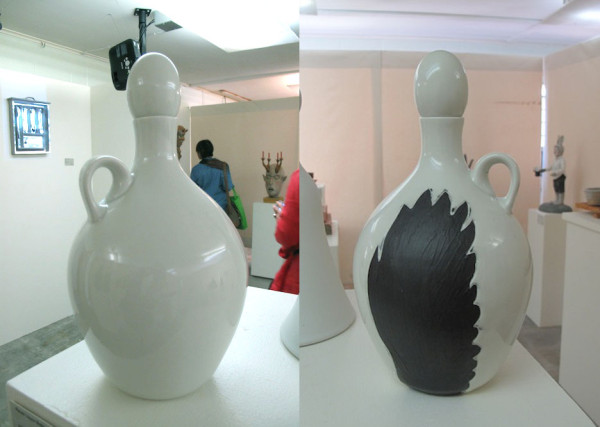 Chris Gray, Raven Bottle, before and after

I spent longest watching Colby Parsons’ two video-on-ceramic pieces, Fried Eggs and Silverware Drawer. I had seen some still photos and was curious. Project video onto ceramics? It sounded like a desperate gimmick. Another Raven’s Wing, with electronics and a soundtrack, as if you were trying to put all of your marginal artforms into one basket.

Surprisingly, it was OK! Parsons uses the funny gimmick to make funny pieces, wisely leaving serious exploration of the medium for a future generation when art without video projected onto it will seem odd. Sure, it’s expectable—bacon in the frying pan, spaghetti forking in the silverware drawer, but the novelty of the medium is sufficiently distracting that the content vacuum is not immediately painful. Parsons’ videos alternately reinforce and then dissolve the 3D reality of the dull gray clay sculptures they’re aimed at, hinting at some really striking effects that, in the hands of a Tony Oursler, can be put to real expressive use. -Bill Davenport

Skin Embellished and the NCECA Biennial

Glasstire contributor Margaret Meehan sent in these pics from some of the Montrose galleries she visited: 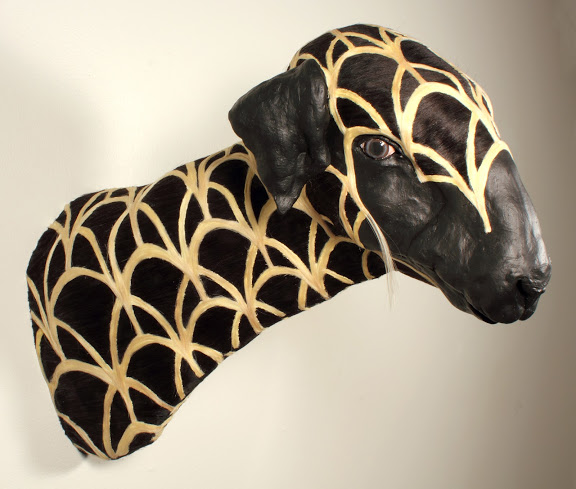 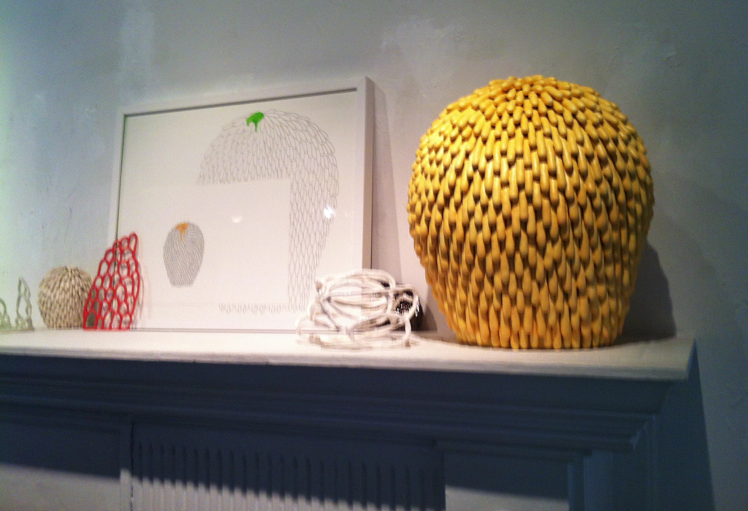 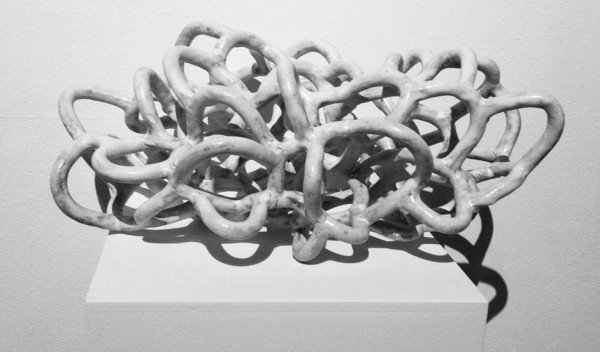